We are proud to announce that our CIT Solutions staff member Sarah Smith received a Silver Emu Award for her distinguished service to Scouts ACT and Scouts Australia.

Contributing more than 20 years of volunteering and work at a higher level within the scouting community, Sarah is proud to have dedicated a large part of her life to the growth of the local Scouts in Canberra and beyond.

Founded in Australia in 1958, Scouts is a leading global association that promotes youth development for young people aged 5 to 25 years. Through a diverse range of activities, Scout Groups around Australia aim to develop skills in leadership, teamwork, problem solving, communication and resilience for the personal development of its 70,000 active members, all while having fun and adventures along the way.

The Scouts Australia Silver Emu is awarded for the extensive, distinguished and consistently high-level service of an Adult Member who holds an active Leadership role within the association. Recognising her contribution at a Branch and National level, this award commends Sarah for her significant work towards the wellbeing of scouting in Canberra and nationwide. Sarah has been a passionate supporter of the Scouting community since she was involved herself as a Scout during her youth.

Amongst many achievements and contributions throughout her involvement with Scouts, one of Sarah’s most important moments was when she became the first female youth member to be invested in Canberra within the Scout Section.

“I still have the photos of my investiture as a 12 year old,” said Sarah. She is proud to be part of the evolution of Scouts from being a boys only club to becoming an all-inclusive environment. Sarah transitioned into the leadership side of scouting when she became a Joey Scout Leader in Belconnen’s Mount Rogers Scout Group in 1998.

“I started my volunteering with Scouts as an active youth member as a 16 year youth helper,” said Sarah, reflecting on her Scouts journey. She later became a Joey Scout Leader, Cub Scout Leader and Assistant Group Leader at Kama Scout Group in Macquarie.

“I really wanted to be able to give something back,” said Sarah. “When I was a Scout, my leaders were amazing. They were always giving up their time and making our programs and camps fantastic. I have now been an active leader for over 20 years and it’s been very rewarding to be able to support and mentor fellow members.”

In 2017, she took on the role of Branch Commissioner Group Development. She’s involved with mentoring, supporting and assisting Group Leaders across the ACT to effectively lead their groups. She also investigates and supports the establishment of new Groups, and has supported a number of Cuborees, Australian Jamborees and local Canberra Scout camp events. In all aspects of her career and volunteering, she always puts her hand up to help out wherever she can.

Sarah’s contribution to Scouts was formally recognised at an awards ceremony in October 2022 on behalf of the ACT Branch.

"I have much pleasure in advising that Adult Recognition Awards and Rover Service Awards have been conferred by His Excellency General the Honourable David Hurley AC DSC (Retd), Governor General of the Commonwealth of Australia and Chief Scout of Australia, for their dedicated voluntary service to young people through the development of the scouting community."

With a professional background working in the education sector, Sarah is passionate about education all round as a tool for good. Sarah excels in both her volunteer work within the Canberra community and her professional work as an Administration and Project Officer in our team at CIT Solutions. Within the scouting community, Sarah is always one of the first people to assist with running meetings, group camps and fundraising activities. Sarah believes in the power of teamwork, and is thankful for recognition of her outstanding contribution to Scouts throughout her life so far.

“To be awarded the second highest award for exceptional service and volunteering within Scouts, a national organisation  of over 31 million people worldwide is very humbling,” said Sarah after receiving the Silver Emu Award. “I have had the pleasure of awarding youth their highest awards and seeing them go on to become leaders and mentors makes volunteering an enjoyable experience.”

From here, Sarah will be taking up an Assistant Chief Commissioner role within the ACT Branch for the next 3 years, and is also on the management committee for the 2023 Scouts ACT Cuboree.

"Along with being an active Board director to Scouts ACT, there's no rest for the wicked!” said Sarah with a laugh, “but I enjoy being busy, however it’s always great just to be a big kid too!”

Congratulations Sarah on your significant achievement and well-deserved award! 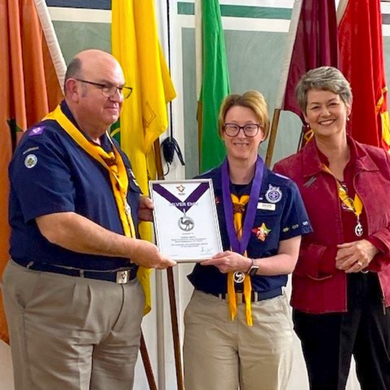